Good Health Starts in the Mouth

By office on Tuesday, February, 2nd, 2016 in Oral-Systemic Connections, Periodontal Health No Comments 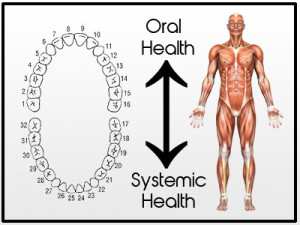 Most people don’t think much about their teeth and gums until something goes wrong. They see their dentist as a problem-fixer, a kind of mouth mechanic, not realizing that their oral health actually has an impact on their overall health and well-being.

Holistic and biological dentistry emphasizes this connection – along with a conservative approach to treatment that recognizes and supports the body’s self-regulating, self-healing abilities.

Conventional dentistry is starting to recognize this connection, as well, perhaps most obviously with respect to the link between gum disease and systemic health. Scientific research continues to show how key periopathogens – harmful bacteria and other microbes that play a major role in the periodontal disease process – turn up at sites far away from the mouth.

Several months ago, news came out about a woman whose artificial knee got infected after she began flossing her teeth too aggressively. This cut up her gums, which then allowed bacteria into her blood. A culture of fluids taken from her knee showed the culprit to be S. gordonii, a periopathogen. 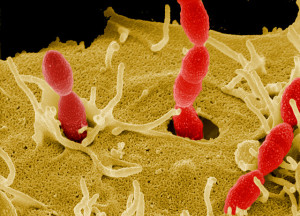 Oral bacteria has likewise been found in the knees of people with rheumatoid arthritis and the hearts of those with cardiovascular disease, among other locations. Other conditions associated with gum disease include stroke, diabetes, cancer, Alzheimer’s and kidney disease.

The common denominator among all of these? Chronic inflammation.

Now, in and of itself, inflammation isn’t a bad thing. It’s part of your body’s natural defense against infection and injury, a sign that it’s marshalling resources to heal the damage. But when it becomes chronic – ongoing, long-term – it becomes a problem. The immune response winds up damaging the tissues it would otherwise protect.

All of the things that fuel chronic inflammation are also things that fuel gum disease, including poor diet, lack of physical activity, chronic stress, sleep debt, and tobacco or other drug use.

And just how big of an impact can there be? One study published just before Christmas found that among more than 15,000 patients with a history of cardio-related problems, the greater the degree of tooth loss – a sign of poor gum health – the greater the risk of stroke and cardiovascular death.

While this study does have its limitations and shows only relationship, not causality, it adds to the bulk of evidence that taking care of your gums goes a long way toward supporting your overall health.

I appreciate the new technology that Green City Dental has put in place as a result of its extensive remodel and the notion that patients can set goals for their dental health.